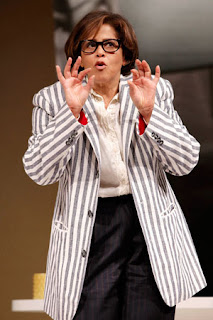 Last night I stood in front of the two theatres on Addison Street in Berkeley, marveling at how on one stage the legendary Rita Moreno was getting ready to perform her new show that she developed with Tony Taccone, called Life Without Makeup, and on the neighboring stage the Obie Award winning powerhouse Anna Deavere Smith was preparing to performing her new work, Let Me Down Easy.  It always amazes me that Berkeley Repertory Theatre with its unassuming facade, in its unassuming location is able to take the theatre world by the gonads and present work that changes the culture- and that is exactly what Let Me Down Easy will do. It will change the world. I was  so emotionally drained after the show that I've barely had energy to do a thing all day, today. Rarely, have I laughed so hard, and cried so hard, within the short span of a play, without feeling resentful or manipulated. Within a non-stop 100 minute flash, Smith reveals the personalities of people she interviewed to develop this masterpiece. She becomes these people. She uses their exact words to tell their stories of death, cancer, and the health care system. You get Lance Armstrong, Texas Governor Ann Richards, Eave Ensler and a host of others. Much of the reenactment is done with Smith's tongue planted firmly in her cheek, especially Lance Armstrong. But, later in the show when she begins to depict other people, like her own aunt, there is an empathy and a truth that I have rarely witnessed on the stage. It touched me to the core. It must have touched most of the audience too, because all I could hear during the pauses were hundreds of poorly conceived sniffles.

There are only two performances left of this show. If you ever get a chance to see the remarkable Anna perform live, you must.