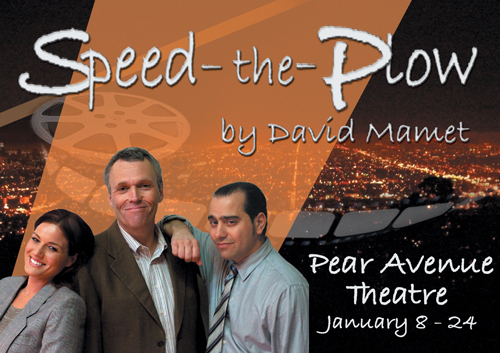 Well, we open tonight. What a great time this has been for me. It's so rewarding when you have the chance to work with a group of actors that are all focused on simply making the show the best it can be. We had our preview last night and it went very well. It's interesting to watch the audience respond to "Speed-the-Plow". Much of the dialogue is shocking to our 2010 politically correct ears. Wait, let me rephrase that. In public, people put on their politically correct faces. At home watching t.v. or a movie there is plenty of non-p.c. stuff out there. And at home, in the privacy of our living rooms we laugh. Look at all the popular shows: Jersey Shore, Cops, etc.. But in public, people never want to show that they might find cynical, obscenity filled ideas amusing or entertaining. Thus, many cower, in public. That's one of the reasons I've been so pleased to be able to bring this show to our audience. I like to shake people up and help them get off their self-imposed pedestals. There is often nothing more freeing. Always having to censor our reactions to humorous vulgarity or cynical irony is tiresome. Mamet gives us a chance for an hour or two to be free of that burden.

Come and see the show!

Hollywood mid-level producers Bobby Gould and Charlie Fox engage in a verbal boxing match centered on the eternal debate of art versus money. Should Gould recommend to his unseen boss another bad action would-be blockbuster? Or should he put himself on the line for a film adaptation of a spiritual, uplifting, and apocalyptic novel? The office's temp acts as catalyst in this debate. Gould has her read the novel in order to report on it to him later at his apartment. Things get very heated, but we don't want to spoil it for you. So come see the show!

Continue reading more about the play on our web site.