This is the Video Promo for the show at A.C.T.

About ten years ago I came across a play called "'Tis Pity She's a Whore" by John Ford in an obscure book of non-Shakespearian classical monologues for men . The title itself is shocking. The monologue from the play has a young man, Giovanni, trying to convince a priest to condone his desire to sleep with his own sister, Annabella. Intrigued, I found the play at the library and read it. I was mesmerized. This play was like nothing I had ever read. I couldn't believe that it was written just eleven years after the death of Shakespeare. It was so like Shakespeare in form, but so different in spirit. In most of Shakespeare's plays order usually wins the day and right usually triumphs over wrong. But in this play with its intricately woven, exquisite story line, no one is who they seem to be and there is no justice. We are left with a chaotic world, scoffed at, and then the curtain falls. 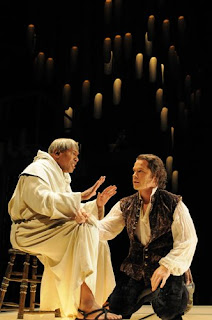 I must take my hat off to A.C.T's Artistic Director, Carey Perloff, for taking on this work. The title, the story (revolving mostly around incest, murder and deception), and it's complete obscurity would normally make those who run theatre companies starved for audience, run away quicker than you can say "Barak Obama for President". But Ms. Perloff decided to take the risk. It seems that the plays diva, the versatile and brilliant, Rene Augesen, wanted Perloff to produce this show after they became aware of it through Tom Stoppard's use of it as a device in his play, "The Real Thing". Perloff promised Augesen that they would and thankfully she kept her promise.

My personal experience with the play prior to this had been the strange reactions I would get whenever I did the Giovanni monologue at auditions. Here's how it usually went: I would announce that I would be doing a piece from "''Tis Pitty She's a Whore". That would immediately raise eyebrows across the table. No one had heard of the play, and the title itself just is so non-P.C. Then I would begin, and as soon as the people in the room realized that I was asking a priest to give me permission to schtupp my sister, I'd lose them. When I had finally finished, came the inevitable questions. "He really wants to sleep with his sister? Where did you find that piece?!!" Needless to say, I stopped doing the monologue. It just turned people off, and it seemed utterly preposterous. Maybe now that A.C.T. has dusted off this work of complete genius, I'll give it another shot. 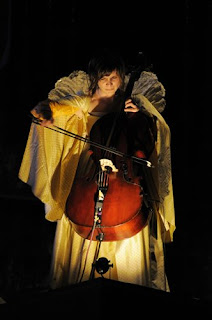 The production itself is mesmerizing. The Scenic Designer, Walt Spangler, created something magnificent here. There are stare cases with balconies on either side. In the center on a platform, upstage, sits a woman named Bonfire Madian Shive. She is a cellist. She is a singer. She is a composer. And she is out of this world! I'm telling you, if you went only to hear her play her cello and sing during this show it would be worth it. In front of her are what resemble organ pipes and they seem to be alive. They move up and down throughout the show, seeming to pulse with the life force flowing through the actors themselves. There are candles that suddenly appear and disappear like ghosts throughout the play; the kind of candles Catholics often light in lieu of going to confession in order to assuage guilt. It's a brilliant effect.

The entire cast is splendid. I really felt that they were proud of this production; it just had that kind of energy. You could sense that they realized that they had created something totally unique and remarkable. Anthony Fusco, who plays Vasques really impressed me. Like Iago in Othello, he is not at all who he seems to be, and his ability to manipulate others for what he perceives to be a higher virtue, left a lasting impression on me for days. Fusco played it to understated perfection.

Be warned the play is bloody, even though A.C.T. has toned the gore down from the way Ford describes it in the original text. 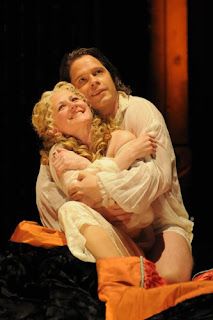 But do yourself a huge favor and go see this play. Shakespeare was not the only genius of this time to write plays in the English language. This is a once in a lifetime opportunity.

The Pear is producing a world premiere of a fantastic award winning play called Homeland Prayer by Jeff Carter. I know it's a good play because I've read it a few times. It's about a family dealing with the return home of a wounded soldier. Timely, and poignant, Homeland Prayer glimpses into the hidden tragedy of war.

Email ThisBlogThis!Share to TwitterShare to FacebookShare to Pinterest
Labels: homeland prayer, the pear

Foothill Adds it All Up

Go check out Foothill College's "The Adding Machine" for your Brechtian fix. T0m Gough, the director and head of the conservatory, has done a fantastic job mounting this strange and over the top play. Many excellent performances and a chance to see a style of acting that isn't done much.