Give Peace a Chance

Give Peace a Chance
Originally uploaded by Master and Commander.
My son's message to the world right now.
Posted by Unknown at Monday, July 31, 2006 No comments:

This is both strange and hillarious. Boy, how times have changed in thirty years. Rock and Bea, singing nostalgically about getting high, you gotta love it.
Posted by Unknown at Saturday, July 22, 2006 1 comment:

The City Lights Theater Company is billing the rock opera ``Jesus
Christ Superstar'' as ``the most ambitious effort that the company has
ever undertaken.'' But some skepticism might surround the production.
For one thing, the image of the show as a cast-of-thousands
extravaganza might seem beyond the means of the tiny San Jose troupe.
Beyond that, would success mean sacrificing the City Light-ness of the
company's being?

With a cast of 28 and a five-man rock combo often surrounding the
audience at the 108-seat theater, City Lights artistic director Lisa
Mallette has filled the relatively small 2,000-square-foot space with a
multitude of sights and sounds in every direction, creating illusions
of grandeur worthy of the show's fabled music team, Andrew Lloyd Webber
(``Phantom of the Opera'') and Tim Rice (``The Lion King''). Yet the
set itself is as humble as a rural church.

The show -- which brought round-the-block lines to South Second
Street for previews last week -- even refutes a third cause for
skepticism: the sense that ``Superstar'' is mired in its early '70s
origins and is not worth producing anymore.

The score alone creates ecstasy, especially if you heard it back in
the day but haven't in a while. There's the title song. And ``What's
the Buzz?'' ``Everything's Alright,'' ``I Don't Know How to Love Him,''
``Hosanna,'' ``Jesus Must Die.'' And all those juicy licks for right-on
guitarist brothers Bill and Tim Rupel.

Talk about a revival! This audacious stretch by City Lights does not
deviate from its mission to aim high and have fun, with the gambling
and gamboling lacking in many of today's movies and television shows
but still present in good theater.

The two sure things going in -- probably the impetus -- were that
Kit Wilder, Mallette's husband and company co-leader, could deliver a
world-class performance in the title role, and that he could do it with
a City Lights sensibility.

His undeniable charisma has a diabolical element that rides that
edge. City Lights is clubby, and there's an air of a sly wink to this
whole thing that is faithful to rock 'n' roll. Yet it's a good-faith
performance. Wilder is an earnest, volatile, human Jesus throughout
those seven final days among mankind. And, zounds, he can hit a high C
full-voice.

Although there are other praiseworthy principals, the voices that
really carry this production are in the chorus. Everyone is miked,
despite the intimate venue. The surround sound and Lloyd Webber's
adventurous harmonies are so sensational they vastly outweighed any
scattered sound-system glitches that still were being ironed out at
Friday's preview. (The choral depth was not a given going in.)

Standing out among the principals is burly, tattooed Adam Campbell
as Judas Iscariot. The vocal role is nearly as juicy as the lead, and
Campbell is big enough for the job. Jay Steele and Michael Johnson are
perfect counterparts as even-more-burly priests. Tim Reynolds as
Pontius Pilate and Tomas Theriot as King Herod are slick and suitably
smarmy.

As a very soothing Mary Magdalene, Jeanne Batacan-Harper has more
than enough heart. Her lack of oomph as a lead rock vocalist creates a
weak impression, however -- at least until her miraculous turnaround, a
tearjerking rendition of ``I Don't Know How to Love Him.'' She redeems
a song that many consider a mawkish cliche epitomizing a mawkish era.

In that era, ``Hair'' was the quintessential rock opera, with
``Jesus Christ Superstar'' seeming a bit of a rip-off, aside from Lloyd
Webber's inventive score. But that ``tribal musical'' truly is a relic now.

In a production that seems more to be set in AD 2006 than in AD 30,
the relevance of this show is palpable for the audience. John might
step on front-row feet accidentally. Jesus' backdraft might muss
patrons' hair. And don't step in his ``blood'' as you're crossing the
stage on your way out. But the spirit takes hold and, for two hours
anyway, it doesn't let go.

A Superstar Is Born


DIRECTING the City Lights Theater Company production of Jesus Christ Superstar, artistic director Lisa Mallette's collaborative style goes well with jazz-minded musical director Gus Kambeitz. He and Mallette have updated parts of Andrew Lloyd Webber's funky rock opera with the occasional hip-hop beat, a smattering of rap and a dynamic range that goes from big production to "unplugged." Both directors wanted the feel of a rock concert while highlighting a very human drama (as opposed to pyrotechnics). Since Kambeitz plays bass through most of the show, he is not there to cue performers in and out of his layered vocal arrangements and Webber's complex time signatures. On the one hand, that has unsettled a few performers who like every cue scripted. On the other, as Kambeitz points out, characters won't have to keep looking up for musical direction. "We've freed them up to just act. ... There's a little more flexibility."

Kambeitz enjoys the idea that every performance will be somewhat different. He offers performers the safety net of a cohesive, synergistic band unit, having just released a jazz album with two of the five-member orchestra. What—Superstar with no string section, no horn section?...more...

Great Review for J.C. Superstar in the Merc

JC the Superest of Stars at City Lights

We open on Saturday, which is sold out. You can come to a pay what you can night tonight, Thursday July 13, and I think that if you call the box office you can get a ticket for $5.00 for tomorrow's preview.
Theater & Performance in San Jose, CA | 'Jesus Christ Superstar' at City Lights 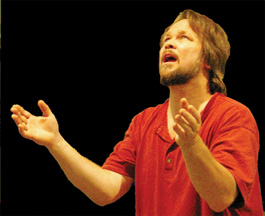 DEUCE a World Premiere by Sharmon Hilfinger at The Pear

What a wonderful rich and multi-layered play this is. Rarely have I seen a new play that is so well written. The acting and directing are superb. You have one more weekend to see this thoufhtful and toouching new play.