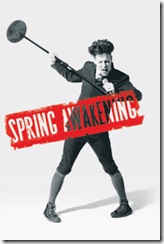 Not since Hair shocked Broadway audiences in 1968, has their been a musical that has so enlivened the genre. Spring Awakening, currently showing right now with the new company - Broadway San Jose - through Sunday, busts down the doors of propriety and jolts us into a teenage reality. Never has there been a musical that so honestly depicts the travails of growing up. Nothing is left out. Heterosexuality, homosexuality,  rape, teen pregnancy, abortion, and child abuse, are all handled with utter frankness. These young actors wear their hearts on their sleeves and hold nothing back. The music is inspiring and heartfelt, and the chorography utterly unique and emotional.

Remarkably, Spring Awakening is an adaptation of an 1891 play of the same name, written by Frank Wedekind. Needless to say the play was banned in Germany at the time because of the subject matter. The play wasn’t even staged in English until 1917 in New York when only one performance was allowed with a limited audience. There were a couple of other staging in the 60’s and 70’s, but it has been mostly untouched by major American theatres.

Thankfully Duncan Sheik (book) and Steven Sater (lyrics) had the guts to create this work of genius. This show absolutely deserves the 8 Tony Awards it won 2007. Everything about this show either moves you, makes you squirm, or brings you to your feet. The two leads of this touring production 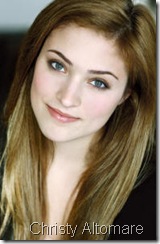 Altomare is not only a superb musical actress but she has produced a number of CDs of her own. Her voice is sweet, soft and melancholic. Check out her latest album “After You – LA Sessions”.  It’s a real treat.

Deserving of a  special mention is Taylor Trensch playing the role of Moritz. His tragic, angry, and touching portrayal of the abused and troubled youth was key in creating the emotional arch of the show.

With the departure of our beloved American Musical Theatre of San Jose, the Nederlander Corporation is doing a wonderful job of bringing Broadway to the South Bay. I miss AMTSJ very much for a myriad of reasons, but I am glad that Nederlander seems to be making a valiant effort to keep us in the Broadway loop so to speak.

You only have a couple of days left to see this wonderful show. If you have teenagers, bring them. Don’t let the naysayers make you believe that this will corrupt your little darlings. Believe me, they talk about this stuff anyway. The show has a wonderful message, and may help you open up a  dialogue with your son or daughter about life and all it’s messiness, happiness, tragedy, and hope.

Frankenstein is in the House 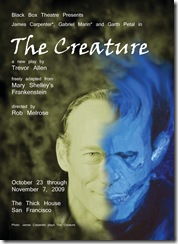 Looking for something to do this Halloween weekend? Go see Trevor Allen's latest production, The Creature, playing through November 7th at The Thick House in the Potrero Hill District of San Francisco. I had the chance to attend a preview last weekend and ended up sitting right behind the author. He seemed very calm, as he should have. The director Rob Melrose assembled an excellent cast of three. The Creature is a stage adaptation of Mary Shelley's Frankenstein. Allen originally wrote the play as a radio play and recently made the changes necessary to bring it to the live stage. His is a Frankenstein story designed not only to scare you a little, but moreover, to make you feel something for this poor misunderstood creature.

Captain Walton is played by Garth Petal who I saw earlier this year in Mud at The Cutting Ball Theatre. What was neat about his performance in The Creature, was that he was so different in this role, that I didn't realize it was the same person, until after I read the program. I love it when that happens. Victor Frankenstein is played by Gabriel Marin who brings a moving passion and boyish idealism to a very dense and difficult role. The Creature (the Frankenstein monster) is played by the hugely talented James Carpenter. With an Ian McKellen-esque face and a command of body and voice that I have rarely seen, Carpenter creates a monster that will thrill you, terrify you, and move your soul. The voice Carpenter has created for this performance is sort of a mixture of Yoda, Gollum and Darth Vader. It's far from comical, though. The voice resonates with humanity and suffering. You will be thinking of it, and hearing it in your imagination for days.

The play indeed has the feel of a radio play. Most of it is in narrative form, although it funnels into real time dialogue at key moments. Throughout most of the show you could close your eyes and pretend you were listening to a radio play, but don't, you will miss the subtle and sublime physicality that all the actors deliver. The set designed by Michael Locher is spooky and sparse. Some very nice effects are created with reverb in the sound system. It’s a excellent night of theatre.

How not to Drive to Acting Class

Monday night a friend of mine and I were driving to our acting class in San Francisco. I was behind the wheel of my Subaru Outback wagon. We had decided earlier to take Highway 280 instead of Highway 101. I guess because it' just a nicer drive and we had the time. Besides, it was Columbus Day and the traffic would surely be light. We turned left from El Camino on to Page Mill Road. Suddenly I heard tires screeching in the distance, ahead of us. Like a nightmare unfolding, about three hundred yards directly ahead, I saw a car accelerating toward us at high speed. It had jumped the barrier separating the west and east bound traffic. There were no other cars between ours. Suddenly, my mind became a calculator. Everything slowed down to slow motion speed. I saw the car coming head on directly toward mine. As I moved to the right, it tracked me as if the front end of my car was pulling it toward itself like a magnet. I felt no terror. However, I was keenly aware that both of our lives may soon end if I didn't make precisely the correct decisions. My brain began to estimate the speed of the oncoming vehicle. I estimated the speed needed to miss it while also not jumping the curb to our right, and flipping my vehicle, or causing it to smash side long into the runaway car.

As he was nearly upon us, I was riding the curb to the right, driving in the emergency lane. I had no where else to go. I accelerated slightly, because I could see that if I maintained our current speed he would plow into us head-on. I would say he was traveling at about 70 miles per hour. Just as I accelerated, the car passed us, side swiping my side mirror.

I can still see the whole scene in my minds eye. It couldn't have lasted more than a few seconds but it seemed like much longer. I looked in my rear view mirror and saw the car quickly swerve to the left and smash into a cyclone fence at full speed. The front end of the car literally disintegrated. My friend and I were in shock . I stopped the car. Quickly I realized that the person behind us was either dead or severely injured. I put my car in reverse and backed down the road in the emergency lane. I was too upset to drive straight at this point and started scraping against the curb. So, I stopped, got out of the car and ran toward the heap of metal in front of me. As I arrived, two women who were driving behind us and witnessed the whole thing were already with the driver. I thought he had to be dead. But they told me he had spoken and seemed fine. Within a few moments he quickly recovered, got out of the car and tried to escape the scene. I stopped him physically, which was probably a stupid thing to do. He threw something over the fence that he had in his sweat suit pocket. The man was on some very potent drugs and obviously had some on him as well. The police and fire people showed up, arrested the man and the rest is history. He was driving a Volvo. They say that Volvo's are the safest cars on the road. It's true. I don't think this man would have come out unscathed in most other cars.

What I learned from this in a visceral way is that life can end instantly without warning. If anything had been different, if I had swerved, if I had miscalculated in the slightest, I probably would not be writing this now and if you know me, you might be attending my funeral right now and the funeral of my friend.

Live for today. Love as much as you can. Be kind. Hug your children. Tell everyone you love, that you love them. Listen to people. Give yourself fully to every moment of every day. It will end one day. It will.

Email ThisBlogThis!Share to TwitterShare to FacebookShare to Pinterest
Labels: driving, near accident, paloalto 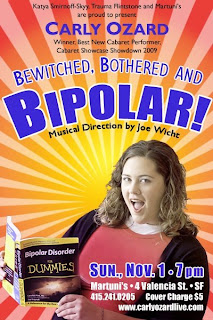 Carly is a fantastic singer and performer. Her comic timing and powerful voice will leave you thoroughly entertained.
I saw Bitter and Be Gay (see below). It was the best Cabaret show I have ever seen, bar none.
Here' the bio from her web site:
Carly Ozard, a classically-trained mezzo-soprano, and no stranger to Bay Area musical theatre, recently celebrated her one-woman cabaret debut with Bitter and Be Gay! Dubbed "The Kathy Griffin of Cabaret" by Chad Jones, Ozard's comic cabaret tells her story about being the biggest "Fag Hag" in San Francisco. Bitter and be Gay was co-created with Barry Lloyd and Shawn Ryan.
Ozard has played leads in The Golden Apple (42nd St. Moon),Carousel (Lamplighters), and was featured as Sally in Follies, opposite San Francisco Cabaret regulars Barry Lloyd, Lua Hadar, Russ Lorenson and Linda Kosut. Ozard has performed with Foothill Music Theatre, Broadway by the Bay, Altarena Playhouse, Notre Dame de Namur and as a cantor at the Castro’s Most Holy Redeemer Church.
Carly Ozard was a frequent co-host of Open Mic at Octavia Lounge on Fridays, and regularly performs at Martuni’s as a featured guest at Katya Presents! and in Trauma Flintstone'sBijou Nights. Ozard made her Plush Room debut in November 2007, and was a member of The Bracebridge Dinner in Yosemite in 2007.
Carly was honored to share the stage with Charles Strouse, Andrea McArdle, and Klea Blackhurst in You've Got Possibilities, the annual 42nd St. Moon Gala of 2008. Carly Ozard coaches with her music director Barry Lloyd, Michael Lavine (NYC Coach) and studies voice with Baker Peeples.
SHOW: Bewitched, Bothered and Bipolar! starring Carly Ozard
DATE: Sunday Nov. 1st at 7 PM
WHERE: Martuni's - 4 Valencia Street, San Francisco
INFO: 415-241-0205
Posted by Unknown at Saturday, October 03, 2009 No comments: